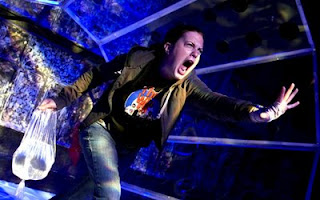 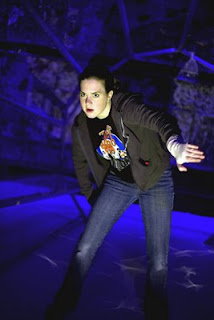 Last night, my boyfriend Tom and I went to the Sanford Meisner Theatre to see a new play by Jason Stuart. The first show I saw there was “The Starvation of Ruby Nellis” by Jeff Rose, my brother directed, and Philip Seymour Hoffman (pre-fame) was in the cast. So I like that old space, however far west a walk it is (it’s across the street from Chelsea Piers), and however much that neighborhood has changed. Where the WPA Theatre used to be on West 23rd Street (I swear I saw the first preview of “Steel Magnolias” there, though Google doesn’t back me up on that), there’s a luxury condo building.

“Washing Machine” is the kind of theatre that I love- it’s so theatrical, you have difficulty imaging it on TV or as film. Stuart has crafted this mosaic of distinct voices (I counted nine) speaking about one event- the drowning of an unnamed five year old girl in a laundromat washing machine. The characters’ varying points of view are distinct. Some questions raised are answered, some aren’t (which is fine with me- why not a little mystery?). There’s the little girl; her mother; her stepbrother; her best friend; the Polish woman who owns the laundromat; an old man who’s another customer; the spokesman of the company that manufactures the washer; the girl the stepbrother has a crush on; and the insurance claims adjuster, who becomes obsessed with the way the little girl died.

Akiko Kosaka’s set is the abstracted interior of the machine, beautifully realized by Ben Kato’s lighting design. Michael Chamberlin’s direction is a model of clarity, and lets the acting and the text stir our emotions without being sentimental. All the roles are played by Dana Berger. Despite her Ace bandage-wrapped wrist, she brings a distinctly different physicality to each role. Berger is a fearless actress who isn’t afraid to look unattractive if the character requires it. It’s a tour de force for her, and each of the elements of the production (actor, play, director, designs) work together fluidly.

“Washing Machine” is Fist in the Pocket Theater’s first production. I can’t wait to see what comes next. “Washing Machine” runs about an hour, and closes July 19th. Tickets are available through Theatermania.

The photos of Dana Berger are by Michelle Enfield.
Posted by Anne Phelan at 12:53 PM

You totally sold me! It's rare that I read a "review" that actually makes me want to drag myself out on my night off. We'll discuss over coffee.