"The Girl in the Black Helmet" 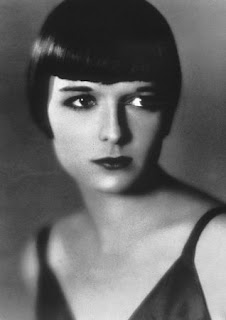 Last night, I reread Kenneth Tynan's article about Louise Brooks, "The Girl in the Black Helmet," in the August 29th issue of the New Yorker, a kind of greatest hits selection of old articles.  This was a profile from 1979.  I don't remember when I first read it, but I certainly know more about Brooks now than I did then.  I remember being more interested in the fact that she wound up in upstate New York than anything else.

I have seen "Pandora's Box," the G.W. Pabst film (with Brooks' remarkable performance), ad I've read (and taught), Frank Wedekind's plays "The Earth Spirit" and "Pandora's Box."  I certainly understood why Wedekind's plays weren't produced in the German Empire in the 1890s; plenty of sex, prostitution, a Jack the Ripper-like serial killer, and a lesbian countess.  The film's screen play is not identical, but the broad strokes are the same.

The other reason that I feel like I know Brooks better, is that I've been fortunate enough to twice be a playwright-in-residence at the Inge Center for the Arts in Independence, Kansas.  Eleven miles to the east of Independence is Cherryvale, Kansas, where Brooks was born in 1906.  I find it difficult to wrap my mind around Brooks coming from such a small, rural place, that looks like it could be anywhere.  I suppose Brooks was a thing unto herself. 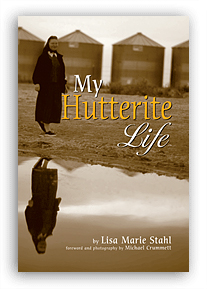 There are Little Libraries all over Brooklyn these days, and, also fewer books abandoned on the street.  My latest find is an early career John Le Carre, but the previous one was Lisa Marie Stahl's My Hutterite Life.  I chose it because I knew nothing about them or where they lived.

The Hutterites came to the northern U.S. and southern Canada from Germany by way of Russia.  They are somewhat like the Amish in their rules about dress and adult baptism, but they don't eschew all modern technology.  In 2003 when this was first published, Lisa Marie Stahl had decided to give up writing her newspaper column in he Great Falls Tribune, 'On the Colony,' because she married.  This meant that she had to move to her husband's colony after the wedding.

One fascinating thing to me was the amount of cooperation among the colonists. All cooking is communal, all meals are eaten with everyone present.  All the men run the farm.  Their church services consist mainly of old sermons read aloud in German.  Children study German at the colony's school, which goes to the 8th grade.  Stahl writes that all the adult vote in local and national elections but that they don't get involved in politics (huh).

Since this is Stahl's personal chronicle of her life "on the colony" there is no third party critical writing.  She does not question her life as it is (why do men make most decisions?  what would attending high school be like?).  This is a collection of newspaper columns explaining life on the colony, not examining it.  For me, that made the material more interesting.  I would not want to live there, but I enjoyed reading about it.

A car service is a distinctly New York City outer borough thing.  Cheaper than a Yellow Cab, and often cheaper than Uber, a car service is the cheapest and easiest way to get somewhere the Metropolitan Transit Authority doesn’t go.  In order to use a car service, you call them.  The dispatcher answers and assigns a driver to pick you up.

About 15 years ago I got priced out of Manhattan and moved to Brooklyn. Shortly thereafter my partner and I adopted Augie, a beagle/Brittany mix whom we rescued from Animal Care and Control.  We tried a series of daycare places, and finally lucked out with Paws in Paradise on Fifth Avenue.

A car service is the easiest way to transport a medium-sized dog who weighs too much to take on the subway in a crate.  At our current car service we usually got one of three drivers.  One of them was Sandy.  He started driving us years ago, and during Covid-19 nearly every weekday.  Sandy was of average height, barrel-chested, wire-rimmed glasses, shaggy gray hair and a walrus mustache.  He was a few years older than me.  Like me, Sandy was divorced, an anti-racist Democrat and had lived in New York for a long time.

Over the years, Sandy and I became close. Some mornings I’d wait for his car, thinking of what I needed to tell him.  Sandy always had a treat for Augie, and Augie always had a tail wag for him.  They actually grew quite attached to each other.  Sandy and I talked about our families, our health and politics.  We both had had all different kinds of jobs; Sandy had originally studied to be a social worker, then went into the restaurant business and wound up managing a parking garage on the west side of in Manhattan.  When we traveled, Sandy would pick my partner and I up from the airport and know to drive us straight to Paws in Paradise so we could pick up Augie.  After one long flight, Sandy picked us up with Burger King burgers because he thought we’d be hungry.  He always gave Augie a special Christmas treat.  One year, Sandy even gave gifts to my partner and me.

In June 2021, Augie and Sandy both got diagnosed with cancer.  I worried about both of them.  Sandy went through multiple hospitalizations and endless tests.  Augie became unable to breath on his own anymore, and we had to put him down at the end of October.  When I had to tell Sandy, his eyes were brimming with tears.  “You see, since we both got diagnosed at the same time, Augie was my cancer buddy.  I needed him,” Sandy said.  He couldn’t talk about Augie anymore, he got too upset.  Sandy Seeman died last month.  It feels so strange not to be able to tell him things anymore, and that he won’t grow to love our new dog, Buddy.  I haven’t been able to find any kind of memorial for Sandy. So I wanted to write one of my own.  We miss him.

Posted by Anne Phelan at 1:11 PM No comments: 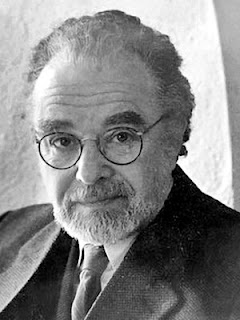 During COVID-19, I have found some great books in Little Library's in Brooklyn.  I stumbled on Reading American Photographs in one of them a few weeks ago.

I thought the book had the potential to be pretty interesting, or really boring, and it was the former.   Turns out that it's this famous book from the late 1980s.  I certainly learned things from it, like the fact that Mathew Brady was the front man for a whole bunch of photographers.  There wasn't one female photographer who Trachtenberg covered seriously; frankly, I think Dorothea Lange or Berenice Abbott is way more interesting than Walker Evans, but that's just me.    Trachtenberg did have interesting things to say about history per se, in addition to the history of the way US audiences perceived photography.

There is only one page where I spotted an error, not obvious to most people.  Chapter 4: Camera Work/Social Work covers Lewis Hine and Alfred Stieglitz.  Trachtenberg describes Stieglitz returning from Europe to New York City, and feeling dislocated. He writes:  "Hearing the Italian opera singer Duse one evening in 1893, he felt a sudden charge:  a contract existed between myself and America.'"  I was shocked to read this, because as any theatre history geek knows, Eleanora Duse was one of the great European actresses of the early 20th century, not to mention the fact that her boyfriend, Gabriele D'Annunzio, inspired Mussolini to invent fascism.  So, Duse did not sing anything.  But presumably Stieglitz saw her act onstage in Italian, and that made him feel more connected to the US, not less (which I think is an interesting thing to contemplate).

Posted by Anne Phelan at 5:14 PM No comments:

There's a brief but good book review in the May issue of the New York Review of Books about Peter Sahlins' '1668:  The Year of the Animal in France' by Lynn Hunt. 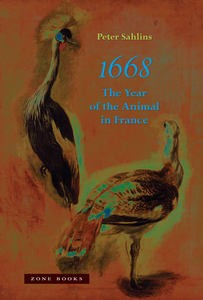 Hunt writes:  'The industrial production of animals developed at the same time as governments and reform-minded elites began to root out bear-baiting, bull-baiting and the wholesale torturing of cats for fun.  The Society for the Prevention of Cruelty to Animals was founded in England in 1824, and the first law against cruelty to animals was passed in 1835, whereas the abuse of children was only explicitly criminalized in England in 1889.  One reformer of the London Society for the Prevention of Cruelty to Children complained, "If wretched children were only dogs, what sunlight would fall into their doomed and dismal lives."'

Posted by Anne Phelan at 8:47 AM No comments:

Labels: Can a Chameleon Grieve?, Lynn Hunt, NY Review of Books, Society for the Prevention of Cruelty to Animals

Something Wonderful Solves the Mystery 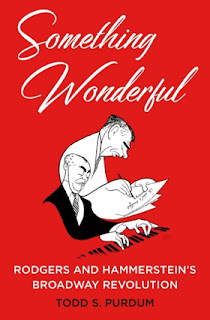 When I first joined the Dramatists Guild, right after grad school, there was a note on our membership cards that said we were allied with The Authors League.  But I could never figure out what The Authors League was.  In Something Wonderful, Todd Purdum solves the mystery.  It was comprised of members of the Dramatists Guild, the Radio Writers Guild and the Screenwriters Guild, and in 1950, Oscar Hammerstein was its president.  Purdum writes:  "Oscar had spoken out strongly against the Hollywood blacklist, saying that to 'blacklist writers on the basis of their personal political views, however repellent those views are, is more in accord with the practices of the Soviets than with our democratic traditions.'"  Thank you, Todd Purdum!

Posted by Anne Phelan at 4:16 PM No comments: 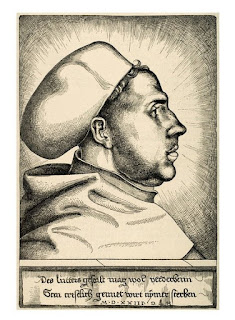 I've just finished reading Lyndal Roper's "Martin Luther:  Renegade and Prophet."  I knew little about Luther before I read the book, other than Western Civ. in high school and the Netflix documentary starring Hugh Bonneville.

A couple of things that I learned:  any woman giving birth "was under the sway of the devil, and that if she were to die before being churched, she could not be buried in the church yard."  I think the Roman Catholic Church outdid itself on that one!

The secular powers had little say in the institution of marriage:  "As a sacrament, it had fallen under the purview of the Church, which decided which marriages were permitted and what counted as incestuous and required dispensations; it all was made more complex because godparenthood created an additional spiritual network of kinship and so a host of potentially incestuous unions."  So this was where the Church was when Luther wrote "On the Babylonian Captivity of the Church," where he began evolving his ideas about marriage, eventually denying that it was a sacrament.

Roper also devotes the final chapter of her book to Luther's anti-Semitism.  To read his words about what he believed Christians should do to the Jews is horrifying.  Anti-Semitism was essential to Luther's theology:  "it was not incidental to his theology, a lamentable prejudice taken from contemporary attitudes.  Rather, it was integral to his thought; his insistence that the true Christians-  that is, the evangelicals-  had become the chosen people and had displaced the Jews would become fundamental to Protestant identity."

Posted by Anne Phelan at 1:52 PM No comments: