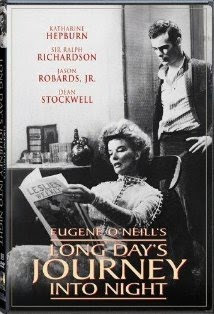 I've seen plenty of productions of "Long Day's Journey into Night," but I just watched Sidney Lumet's 1962 film. If it wasn't shot at the Monte Cristo cottage in Waterford, Connecticut, it certainly looks like it was. The stage version starred Frederic March and Florence Eldridge; the only carry-over from Broadway is Jason Robards (still Jason Robards, Jr., at that point). Katharine Hepburn and Ralph Richardson play the parents, Dean Stockwell (who knew he could really act?) plays the tubercular brother. Andre Previn did the score. It's fantastic.
Posted by Unknown at 12:26 PM

Lumet's version is devastating. I've seen it twice and feel in many ways it may never be equalled. The long dolly out from Hepburn's face to outside the house showing just a speck of light and then cutting back to a closeup is unforgettable. Anne- try reading the chapter on the making of this flick in Lumet's book, 'Making Movies.'

nice post..keep it up